A Rare Glimpse Inside A Zoroastrian Temple In New York

A Rare Glimpse Inside A Zoroastrian Temple In New York

Members of one of the world’s oldest religions have built a new spiritual home in suburban New York.

The Arbab Rustam Guiv Dar-e-Mehr Zoroastrian Temple is a sacred space meant to serve about 1,000 followers of the Zoroastrian faith who live in New York, New Jersey and Connecticut. Thirty priests from around North America, and a high priest visiting from India, were present to inaugurate the temple located in Pomona, New York on March 26.

Help us tell more of the stories that matter from voices that too often remain unheard.

Zoroastrianism was founded by the Prophet Zoroaster, also called Zarathustra, nearly 4,000 years ago in Persia, or modern-day Iran. Followers of the religion, who call themselves Zarathushtis after their prophet, are monotheistic. They pray to God Ahura Mazda (Wise Lord) and believe in a code of ethics that can be summed up with the phrase: “Good Words, Good Thoughts and Good Deeds.”

Fire is an essential part of the Zarathushtis’ worship, since it is believed to be a pure and perfect representation of God’s light and wisdom.

As the official religion of the Persian empire from 600 BCE to 650 CE, Zoroastrianism was once one of the most powerful faiths in the world. The religion spread to India in the 10th century, after a group of Iranians fled to Gujarat to escape persecution. Zoroastrians from India came to be called Parsis.

According to the Religion News Service, the religion’s numbers have dwindled significantly over time. There are reportedly less than 200,000 Zarathushtis in the world today.

The opening of this new space was an important turning point in the life of the Zoroastrian community in the United States. According to a press release from the DMZT, the new $4.5 million temple in Pomona was built to preserve the Zarathusti faith and culture in America, to foster a sense of belonging, and to create a legacy for future generations to enjoy.

The space is reportedly inspired by the Persian and Zoroastrian fire temples of India and Iran. It brings descendants of the Zoroastrian communities in these two countries together under one roof.

Leaders of the community agreed to give The Huffington Post a virtual tour of the new center.

Scroll down to see images of the Arbab Rustam Guiv Dar-e-Mehr Zoroastrian Temple and learn more about the ancient symbolism behind nearly every aspect of this community’s new home. 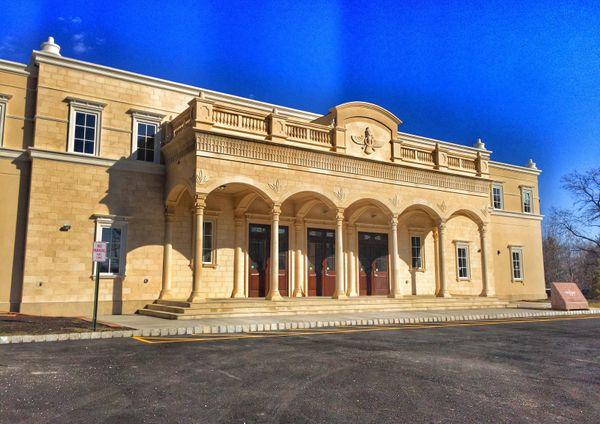 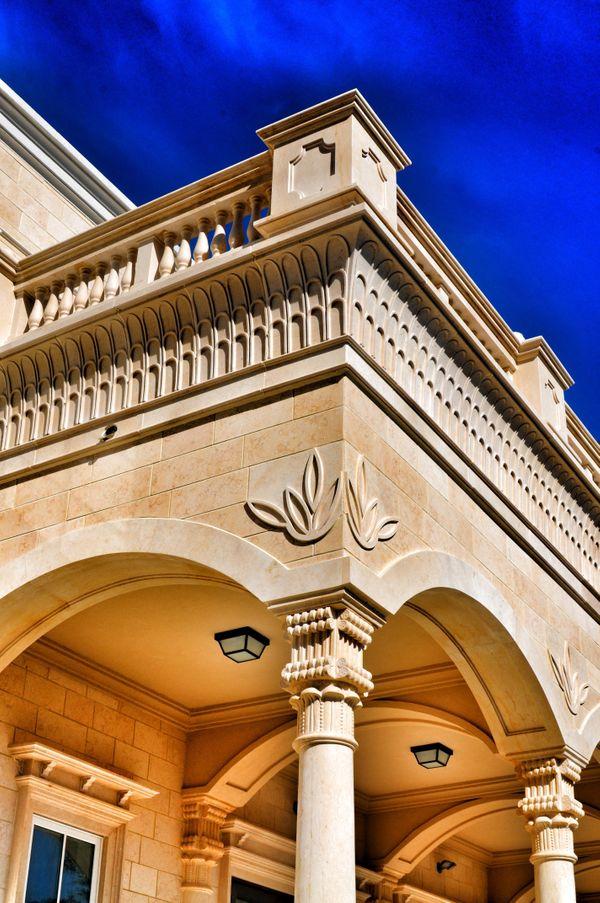 The stone façade mimics the sandstone used in ancient Persia. The column capital design was inspired by the Atash Behram, a Zoroastrian fire temple in Navsari, India. The motif atop the arches is an abstraction of the sacred eternal flame. 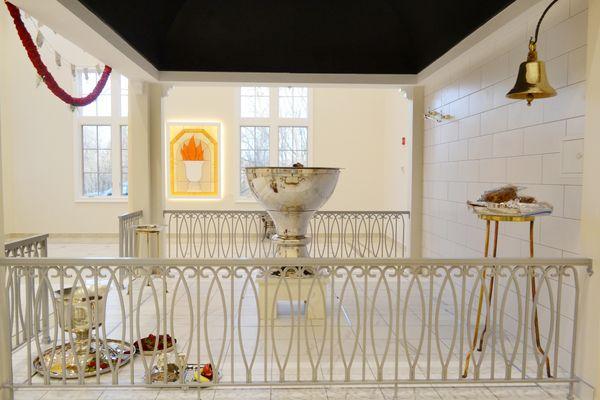 In the inner sanctum of the prayer hall is the Kebla, a sacred space which holds a 3-foot tall metal Agarghanyu, or fire vessel. Custom designed over a period of 18 months, the vessel is based on a 250-year old prototype found at Dadiseth Atash Behram temple in Mumbai, India. 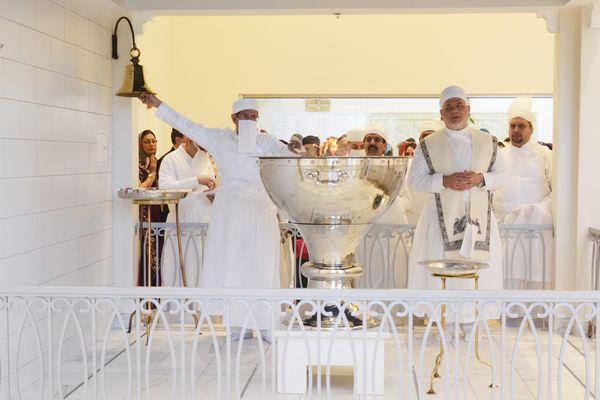 The Atash Nyiash (atash is Persian for fire and nyiash, Persian for praise) is a prayer that is recited in celebration of the sacred fire. It is said as part of the Boi ceremony, traditionally performed five times a day. The ringing of bells during the ceremony signifies the driving away of evil thoughts, words and deeds. 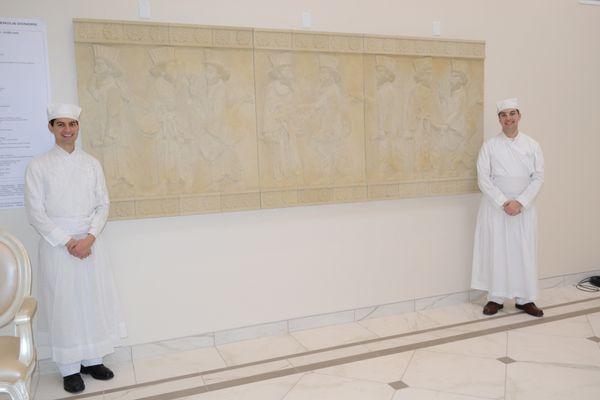 Two young Mobeds, or Priests, stand alongside a custom sculpted panel inspired by the ancient Tripylon Palace in Persepolis, an ancient Iranian city. Created by the artist Oleh Lesiuk, the panel depicts Persian dignitaries waiting in line to meet with the king. 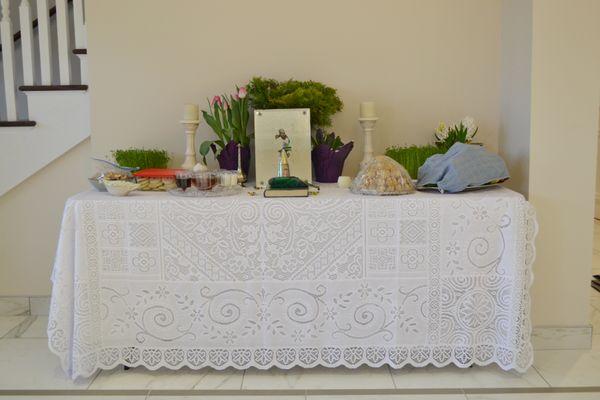 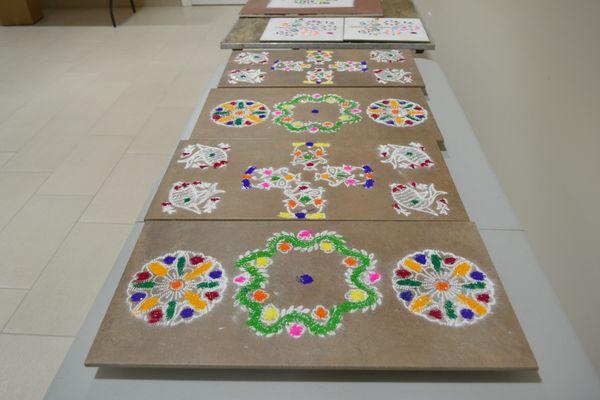 Zoroastrianism came to India about 1,400 years ago. Also called Parsis, descendants of these Zoroastrians have adopted customs inspired by Indian culture. Designs created with powdered, color chalk are a traditional Parsi custom and can be found at the entrance and thresholds of homes and religious temples, especially on auspicious occasions. Here, members of the Arbab Rustam Guiv Dar-e-Mehr display their artwork inside their new temple. 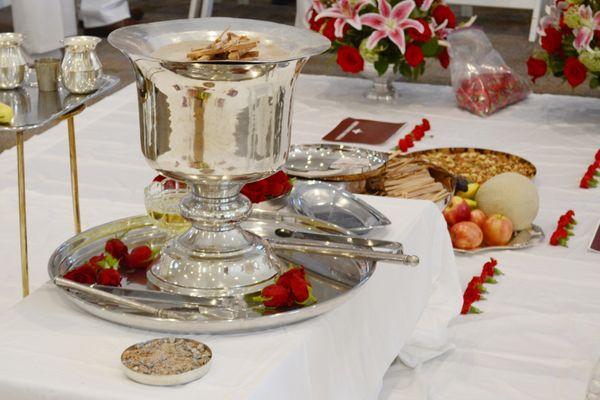 This is a traditional set up for the Jashan (blessing) ceremony for the inauguration of the new building. A small Afarghanyu (fire vessel) is filled with sandalwood for the holy fire. Tongs, which lay on both sides of the urn, are used to arrange the sandalwood to ensure it continuously burns throughout the ceremony. 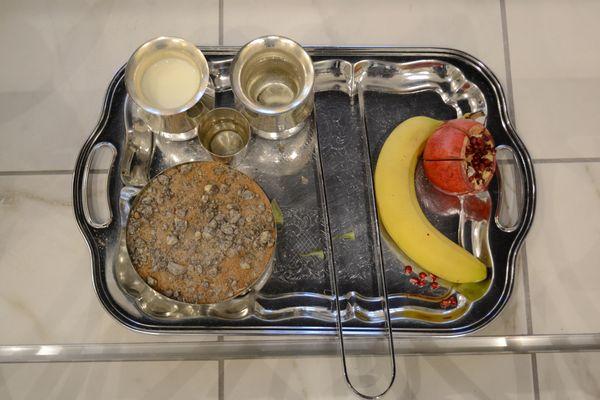 The bowl at the left is filled with frankincense, which is traditionally the dried sap of a Boswellia sacra tree. During the ceremony, priests sprinkle frankincense from this bowl onto the fire to create an earthy incense. Glasses containing water, milk and a traditional sweet along with a banana and pomegranate are also offered as part of the ceremony. 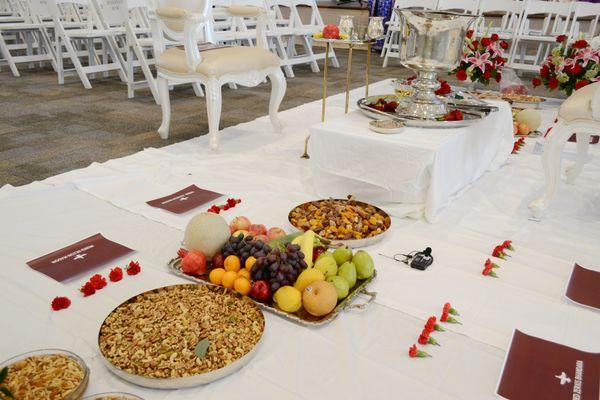 Priests offer fresh fruit, dried fruit and Malido, a traditional sweet, during the ceremony. After the ritual, members of the congregation can sample these blessed offerings. 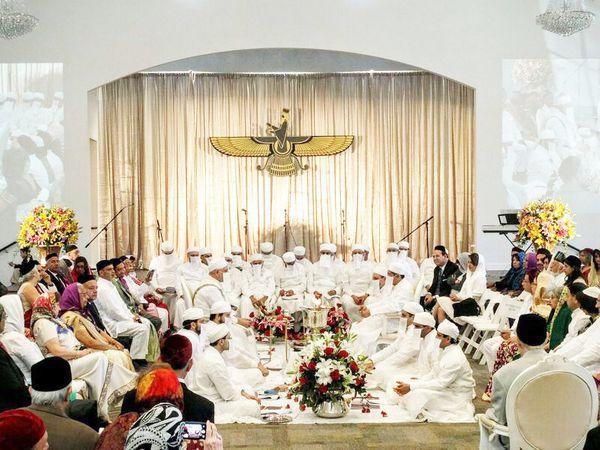 Vada Dasturji Khurshed Dastoor, a high priest from the holy town of Udvada in India, led the Jashan ceremony for the inauguration of the new building along with priests from all over North America. On the wall behind them is the Farvahar (also spelled Fravahar), the ancient symbol of protection that has for years been an identifying motif for Zoroastrianism. Zarathustris perform these Jashan thanksgiving services on special occasions. 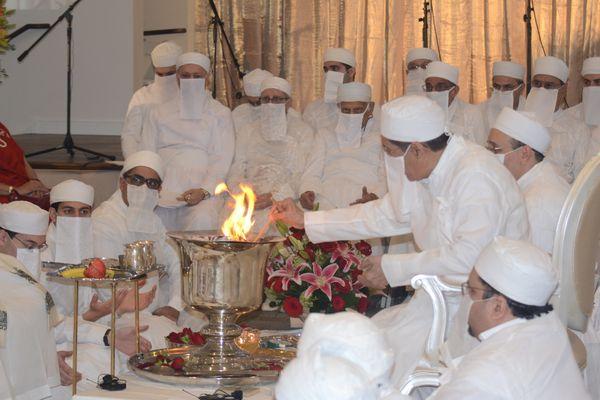 Ervad Pervez P. Patel served as the Raathwi, or assistant to the head priest. Here, he tends to the fire to ensure it continuously burns throughout the ceremony. Priests cover their faces to ensure nothing contaminates the purity of the fire, which is seen as a representation of God’s light and wisdom.